James was diagnosed with stage 4 melanoma in 2020, a week before the UK entered the first lockdown, after visiting his GP with a persistent cough.

Since his diagnosis, James has received immunotherapy treatment and undergone surgery to remove a tumour from his bowel.

Here, he shares his experience with us:

“I’d stumble across so much information online that could vary in legitimacy and Melanoma Focus always seemed to be a place that only dealt with factual information.” 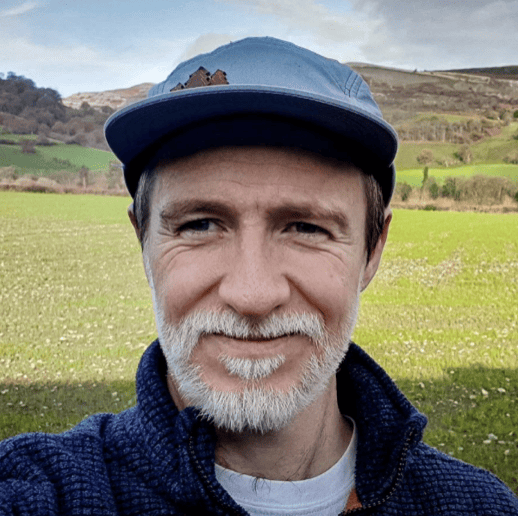 My diagnosis at stage 4 came a week before the first Covid lockdown and 2 months after the birth of my daughter, at the time I was self-employed in a physical job and also a part time firefighter.

I’d had a cough for a couple of months and my GP sent me for an x-ray as a precaution. He didn’t think it would show anything serious, but it did and was followed up by a scan which showed malignancy in my lungs and liver. It was originally thought to be lymphoma and I was told I’d have chemotherapy. I had had a melanoma in situ removed 5 years previously, it took a long time to explain that as I lived in a different area. Eventually, I was given a biopsy which confirmed it was melanoma in my lymph glands near my lungs and in my liver.

“Because the pandemic had started, I only had phone consultations and a lot of the communications were very confusing.”

Things seemed to be very slow. I waited weeks for a BRAF test before they’d start me on immunotherapy. Because the pandemic had started, I only had phone consultations and a lot of the communications were very confusing. I had the chance to speak to an oncologist only because of an error on an appointment letter that sent me to the hospital when it should have been by phone.

Here I spoke to an oncologist who didn’t specialise in melanoma, but told me it wasn’t a cancer they expect to cure and most people at stage 4 probably only have 18 months to live.  I stubbornly didn’t particularly believe him, and I now know this to be untrue.

Due to covid, the hospital was very quiet in April 2020 when I started treatment, although once treatment did start it was straightforward. I was on Ipilumimab and Nivolumab for 4 rounds. I had a slight reaction to the first round and took steroids for a few weeks, which I actually think gave me more problems than the treatment itself. I noticed straight after my second treatment that my cough had gone, I had more energy and was being sick less often, and I could manage a bit more time out of bed each day, although I was really struggling with energy levels for most of 2020. My scans showed things had started to shrink so it seemed very positive.

I had a slight blip later in 2020 where a lymph gland in my stomach swelled to the size of a grapefruit and was blocking my bowel. I had suffered with stomach problems for 3 months, but my hospital in North Wales didn’t have a specialist team or CNS for scan cancer, so it felt like the symptoms I was reporting weren’t being reviewed. After bowel resection surgery I transferred treatment to the Christie in Manchester, mainly due to the levels of support for melanoma and access to a CNS, although the treatment remains exactly the same.

“I certainly don’t feel as affected by it as I did to begin with and I’m able to live a fairly normal life.”

After the surgery I remained on Nivolumab monthly and have scans every 3 months. So far things have been very stable. My treatment ends soon after 24 rounds.

For the most part I’m feeling healthy now. Luckily the treatment doesn’t seem to affect me in any way other than turning my hair white in patches and occasional itchy skin. There are a few things I have to manage, like drinking enough fluids, and due to the bowel surgery, I have to watch what I eat. I wouldn’t say I’m back to my pre-cancer strength and energy levels, but I certainly don’t feel as affected by it as I did to begin with and I’m able to live a fairly normal life.

In hindsight there were maybe some tell-tale signs early on that something was wrong, although perhaps they would have been too small to be picked up by a doctor. I had been struggling with energy levels for a few months before. I felt exhausted over things that previously I would have found easy. I put it down to getting older, stress, but looking back it may have been more to do with what was going on inside me.

What advice would you give to other melanoma patients?

I guess obvious is check your skin, although that wouldn’t have helped me particularly, but if you catch melanoma early it’s far easier to deal with.

I have taken steps to supplement the treatment I’ve had with good diet, exercise, stress management and some alternative therapies, so that I can really feel like I’m doing everything in my power to overcome the melanoma.

I did feel a bit like in the early stage of my treatment I really needed to be pushing people for information. It feels a bit like the doctors are hiding things from you and I always made a point of writing out questions for when I got to speak to them. I almost felt like I was quite a thorn in their side sometimes, but it was just because I wanted all the information to be able to get better. So, I guess my advice is trust the doctors but also push them to help you too.

Melanoma Focus became important because I’d stumble across so much information online that could vary in legitimacy. Melanoma Focus always seemed to be a place that only dealt with factual information. It was helpful to refer to early on when I didn’t know what to expect from the immunotherapy treatment or in explaining why I wasn’t eligible for BRAF treatment. Their helpline was also really helpful when I ended up needing bowel surgery and pointing me in the direction of grants and benefits I didn’t realise I was eligible for.